Hey guys! As you can all see, I quite literally just lit this up. I am actually writing this while I smoke it, kind of a new thing for me but I’ve smoked this stick like 5-6 times now. I love this cigar a lot.

RomaCraft started as just a couple dudes in a Texas garage who wanted a kick ass cigar.. thus their awesome company was born. I love everything they make but the Cromagnon for me takes the cake. It just has a nice dark, oily wrapper and so many flavor nuances.

As I work my way into the first third, I’m already picking up some nice cocoa notes. A little bitter earth notes that I also quite enjoy. Also boy oh boy does this thing smoke a ton. Very thick and smooth trails are flowing off this bad boy.

Beginning to pick up sort of a more espresso flavor over just cocoa. I wouldn’t say coffee because it is more bitter than coffee.. so yeah let’s go with espresso. Also a slight nutty flavor to it which is pleasing.

For the first time ever with this line, some burn line problems are occurring. Nothing severe that warrants a touch up.. not yet at least.

Bought a sampler of some different shock top flavors the other day. Decided to have one while smoking this stoagie. It’s actually a really refreshing palate cleanse and it is quite warm out tonight so it cools me off also! 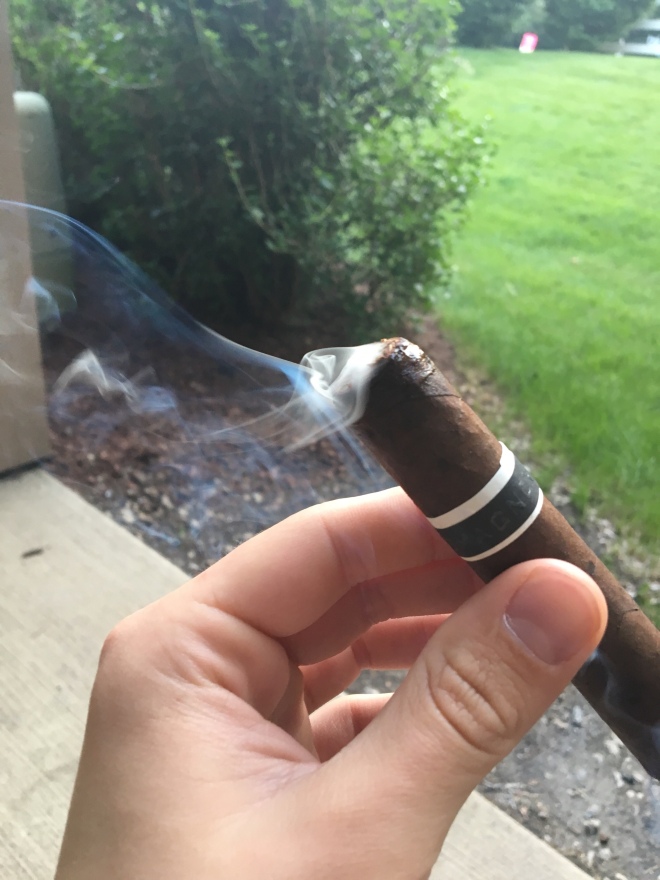 Still can’t get over this smoke. It looks like milk. What a damn fine cigar folks. Also the ash is holding very well. You can definitely tell they take pride in rolling quality cigars. Those cocoa notes are definitely becoming more of a dark chocolate.

Very happily heading into the second-third. Ash is still holding on strong and I’m getting coffee with cream flavors now. The original bitterness toned down a lot. Also beginning to pick up some black pepper, a minimal but albeit noticeable amount. Leather is starting to also become apparent.

Took a picture of how well made the cigar is due to the resilience of the ash and it literally fell off as soon as I took this. LOL. Black pepper and leather are becoming the forefront of the cigar now. The chocolate is taking a back seat for sure now.

Still picking up the same flavors as before. Mainly BP though now. The final third is coming up and I will just be enjoying it now as always. Hope you had a nice read as I enjoyed writing it up!

Hey, my name is Zack and I like to smoke cigars! They have been a passion of mine for a little over a year now. I decided that it would make this hobby even more fun if I wrote about my experiences. Enjoy! View all posts by zackstobaccoblog